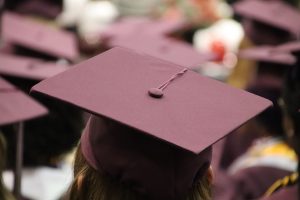 Graduation gowns and gradation hats came to be when universities started formally delivering academic curriculum, which was around the 12th and 13th centuries. Because many professors were priests or monks, they typically wore clerical robes when teaching, and this type of dress influenced the creation of the convocation regalia we know and recognize today.

The Evolution of the Cap and Gown

As time progressed, additional pieces were changed or added to graduation gowns and today there remains a specific look to the robes worn by graduates as they walk across the stage.

Today, the most traditional style of graduation hat is the mortarboard cap. Mortarboard caps are thought to have been created in the 15th century, as part of an evolution from a hat type known as a birettas which was used by Catholic clerics and professors.

The distinctive square shape of a mortarboard is believed to signify a book, chosen in recognition of scholarly achievements. However, the name mortarboard actually comes from the flat board used by bricklayers to lay mortar. Thus, the name of the widely accepted graduation hat also represents the mortar board of a master workman.

Around the 18th century, hoods were added to capes and gowns worn by academics as a symbol of higher intelligence and superiority. Back then, they were also used for added warmth. Today, they remain a colourful piece representing one’s field of study as well as level of academic achievements.

Originally grey in colour, convocation gowns are now most commonly black or are a specific colour to denote academic institution or level of achievement. After the Civil War, it was determined that academic regalia should only be used for graduation ceremonies, which added to its symbolism for recognition and achievement.

Since the 1960s, convocation regalia has largely remained unchanged and continues to represent a timeless tradition and rite of passage. Harcourts has been creating handcrafted, custom tailored robes and regalia since 1842. We understand the history, tradition and the significance of caps and robes worn as part of the graduation ceremony, and would be happy to work with you to create a custom tailor robe that serves to recognize your achievements.